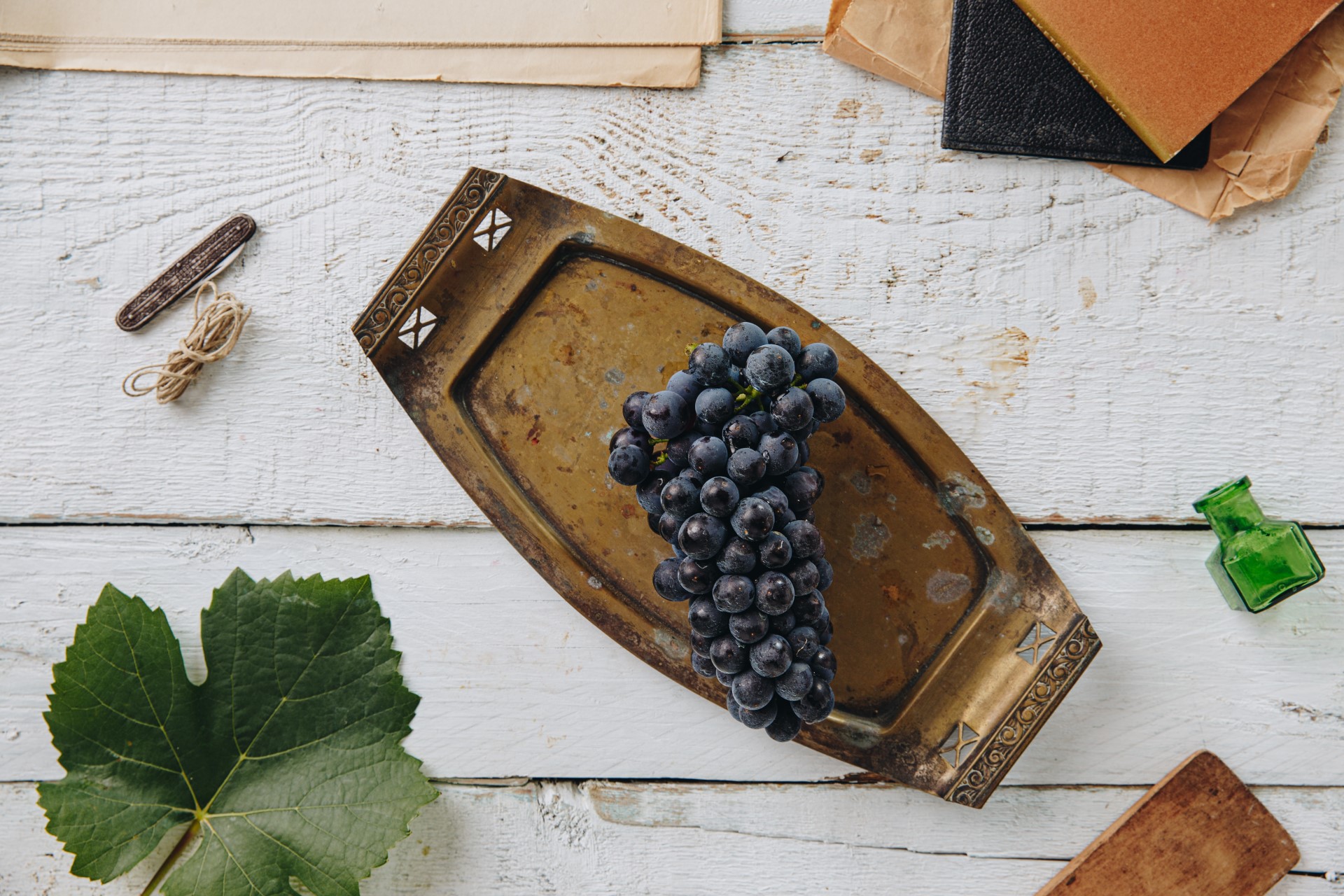 It is certainly an ancient variety, whose origin is a source of much speculation; however, most sources link its origin to France and more precisely to Burgundy. It probably got its name from the French word for pine (pin), which refers to the shape of the cluster. The first mentions of Pinot Noir date back to the 14th century, when Philippe the Bold, Duke of Burgundy, banished the Gamay variety from the Côte d’Or, making way for Pinot.

It has thick, pentagonal leaves and even, compact clusters with small, relatively thin-skinned berries. It is also susceptible to spring frost due to its early budburst. It is the parent of many varieties, thanks in part to natural crossings or mutations. It also boasts numerous clones, such as 521, used for sparkling base wine, or tiny-berried 115. It is often described as an extremely demanding and, at the same time, “fragile” variety. However, with the right terroir and expertise, it can produce fantastic results for both still and sparkling wine.

Apart from France, large plantings can be found in the United States and Germany (as Spätburgunder). In Hungary, where it was formerly called Kisburgundi, it is cultivated on just over 1,100 hectares and is most widespread in the Eger, Balatonboglár and Villány wine districts. The conditions in Eger yield extremely appealing, fresh, cool, dynamic wines with fruits of the forest and red berry fruit, while wines from Villány are characterised by intense, ripe fruit. It is also used for sparkling base wines and as it not only thrives in cool climates but also prefers calcareous, marly soils, it is no wonder that it is by far the most common black grape in the Etyek-Buda vineyards. There are some outstanding wines from certain parts of the Balaton and Upper Pannon wine regions. It loses its majesty and delicacy in blends as it is quickly drowned out by other varieties.

The best Pinot Noirs have irresistible aromas, a silky, velvety texture and are always really sophisticated overall. It is characterised by its thin skins and thus generally has a medium colour intensity at most. Cold maceration is often used with the variety. Its tannins are relatively restrained, but this only makes its acidity even more appealing. Its aromas are rather characterised by red berries. In cool regions or vintages, notes of cherry, redcurrant, tomato leaf, beetroot and herbs may dominate in cool conditions, while in warm regions or vintages, it may be led by ripe fruit, sour cherry, silky tannins and soft acidity, perhaps even with some jammy notes.

Pinot Noir is one of the most elegant international grape varieties. These are pale, fruity wines with an extremely velvety texture, irresistible aromas, soft tannins and crisp acidity. Pinot Noir’s light style is perfect sipped on its own all year round and is also an extremely food-friendly wine. Its elegance make it perfect with baked vegetable dishes, light roast meats, light stews with plenty of vegetables, pepper ratatouille, potato gratin, meat casseroles, lasagne, pizza, lamb, meatballs with tomato sauce, goulash soup, spicy fish soup and braised meat dishes as well as other light Hungarian-style dishes. Choose wines from the last 5-6 vintages, although really high-quality Pinot Noir can also develop in bottle for years. Always store in a cool place, at a constant temperature, away from direct sunlight and heat, to best preserve its aromas, as the wines oxidise relatively quickly. Serve just below room temperature at around 14-16°C in a wide-bowled, narrow-lipped red wine glass. Ingredients that best match the flavour and texture of wines made from Pinot Noir include root vegetables, potatoes, Jerusalem artichokes, mushrooms, beetroot, aubergines, tomatoes, mature cheeses, camembert-style cheeses, goose, duck, game birds and offal as well as pork, veal and lamb dishes.