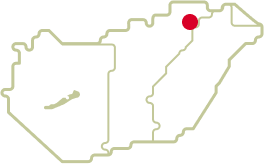 János Árvay was born and raised in Rátka, Hungary, a village in the Tokaj wine region. He never planned to be a winemaker; instead he was a lot into Chemistry and making scrumptious chocolate. Fate had a different idea. As a wedding gift he received 450 vine-stocks in the Meggyes single-vineyard from his father-in-law. From then on the family little vineyard was growing slowly, but steadily. He managed to get a lot of experience at the state running company, at the well-known winery Disznókő and all through the years spent in Tokaj with his business partner at Árvay&Co. Winery. After all he came back to Rátka, to the Family Winery, because this is home.János is the chief winemaker working with his wife, Katalin and their children, Szabolcs and Angelika. Szabolcs –as a winemaker- works on the vineyard and in the cellar. Angelika is responsible for sales and marketing. The family is member of Pannon Wine Guild, Mádi Kör, Junibor, Vindependent.