When thinking of wine-growing areas close to the capital, the Kunság Wine District is not the first one that comes to mind for most. Even not despite the fact that Csepel Island, the region’s northern part got into the limelight when the Wine Producer of the Year came from here a few years ago. But there is another corner of the district, further north, which deserves much more attention; Monor and its surroundings, just 30 kilometres from Budapest.

Situated where the Pesti Plain meets the Gödöllő Hills, lies the town of Monor with its Strázsa Hill, best known to the experienced wine tourists for its cellar village, unique in Europe and counting no fewer than 960 cellars. Some of these cellars are being used by family wineries to this day, and although most of them make wine for their own consumption only, some have already opened up to wine tourism: they can be visited and produce wine quantity for sale. One of these wineries if Strázsahegyi Winehouse. In this article, we give you an insight into the wine culture of Monor through them and with their help.

We met winemaker Tibor Hidegkuti in the morning at the gateway to the cellar village, Szent Orbán square. As soon as he gets out of the car and after introducing himself, he starts presenting the winery through the wines he brought with him. We have a bottle of semi-sparkling rosé made of Kékfrankos, voted wine of the town of Monor, a bottle of Rizlingszilváni (Müller-Thurgau) made from grapes grown in the Mátra Mountains and which was awarded a silver medal in a new wine competition, another semi-sparkling wine made of Irsai Olivér and the gem of the winery, a Karát made from grapes grown in Monorierdő. But we’ll get back to the wines later.... 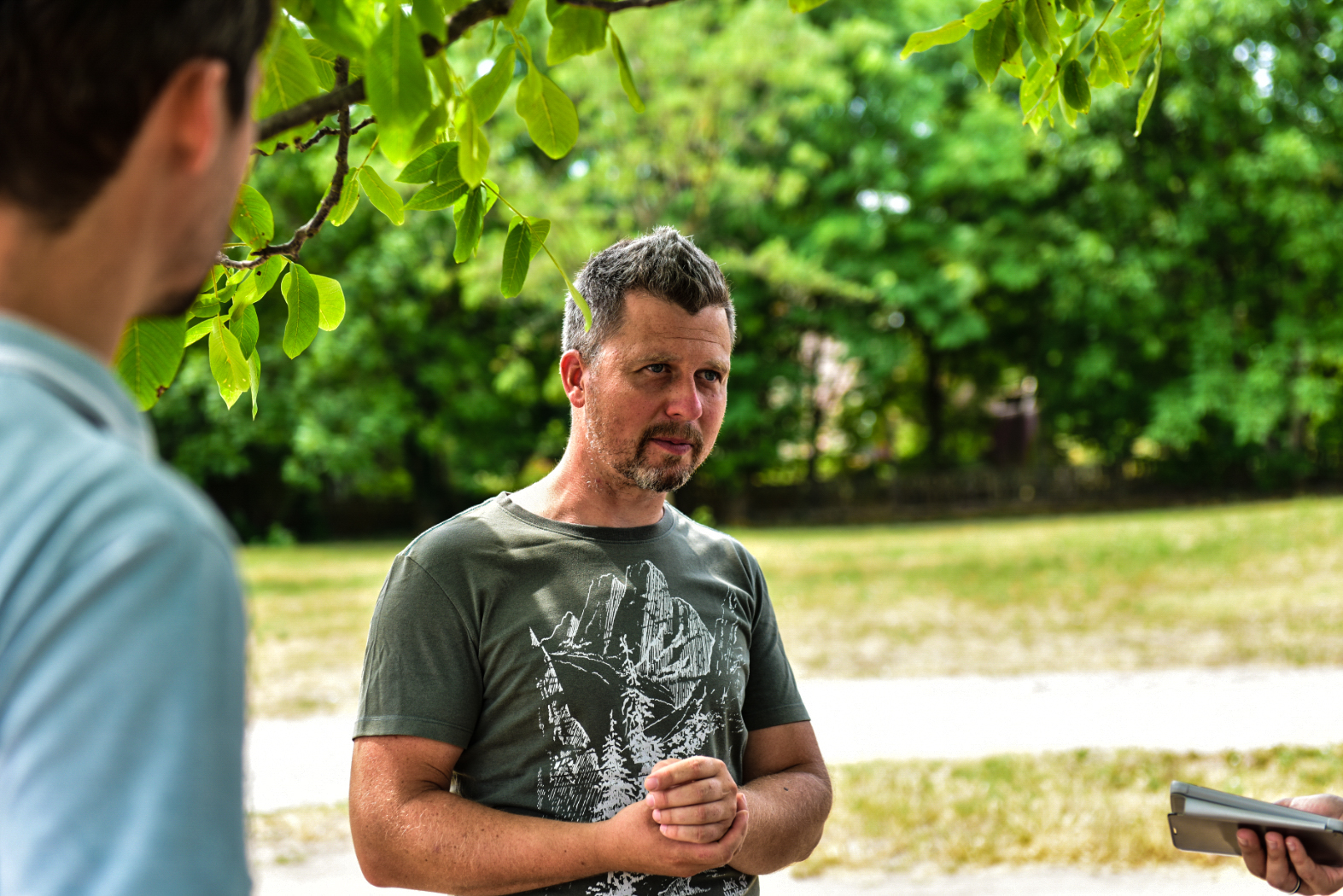 As Tibor explains, we are at the same altitude as the top of Gellért Hill, at around 200 metres above sea level, on the westernmost slopes of the Gödöllő Hills. This landscape is indeed a transition from the plains of the Kunság towards the hills and mounts of the Mátra Wine District, even though Strázsa Hill might arguably pass as a hill to the visitor. Nevertheless, the viewpoint at its top is a perfect place to start our wine tour.

“20-30 years ago, quality winemaking was not the first thing that came to mind when thinking of the Kunság Wine District. In the past 10-15 years, however, changes have taken place within the region, dedicated professionals have emerged and set up wineries with a solid technological background, which has resulted in Kunság being one of the best in the country in terms of reductive wines. You have to look at a new wine or national wine competition and the first place winners; the gold medal winners come in a high percentage from Kunság. In the field of light, reductive, aromatic quality wines the wine district surely is at the forefront”

- he says when starting to describe the region. Tibor, originally a food engineer, is responsible today for the success of Strázsahegyi Winehouse as its winemaker, but this is not where he started his career. He first gained experience at a small winery in the town of Dunakeszi, later at a larger estate in the Balatonfüred-Csopak Wine District. The wish to have once his own wine already came to his mind back then:

“On the one hand, one of the primary motivations was to make my own wine, but on the other hand, I also think that above a certain company size the beauty of this profession can fade. When the head of a multinational company tells you when a batch must be ready, when it must be commercially available, that’s a huge pressure. The wine industry especially is an area where the wine, a living organism is constantly developing, and it is up to us professionals to decide when to bring it to market.” 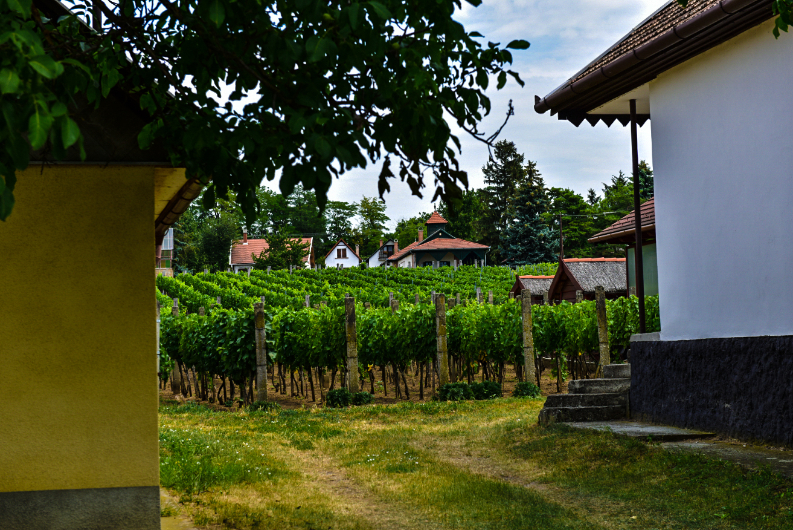 Few people can say that they managed to get into the wine world starting from scratch, with no family background or investor, but in his case he did. He came to Monorierdő after winning a Young Farmer tender and was given the opportunity to lease vineyard land, with the added bonus of being able to use the owner’s cellar technology. This is how the first Hidegkuti wines were born in 2017-18, back then with the H/T logo on the bottles. Then, together with two sociologists from Székesfehérvár, Tamás Domokos and Balázs Mahler – who are in charge of administration, marketing and sales – they founded Strázsahegyi Winehouse.

“The great advantage of Monor is that it is not overhyped, but it also cannot be, as it has different characteristics from other wine-growing areas. Locals also try to organise events in a way that maximises the number of participants.”

- sums up Tibor when we start talking about wine-related festivals. The ‘Wine Districts’ Weekend’ has been organised every year for more than a decade, with local cellar owners hosting winemakers from various Hungarian wine districts, and thus bringing life to the cellar village. The first festival of the year, ‘From Ice Flowers to Ice Wines’ (Jégvirágtól Borvirágig) attracts numerous wine lovers who wish to enjoy mulled wine in the snow-covered landscape. For those interested in wine-related events, mention must be made of the so-called ‘FröccsSzombat’ (Spritzer Saturdays) happenings – which sometimes take place in the form of picnic cinemas and other times street festivals – and also the ‘Monori Pincezene Fesztivál’ (Monor Cellar Music Festival), which was held for this first time this year.

According to Tibor, there are many locals who work with the intention of creating value in the region, and their activity is often carried out through the Monor Wine Route Association. For example, to revitalise the cellar village, the initiative "Buy your own wine cellar" was launched, allowing locals to sell their disused and sometimes neglected cellars. Bearing in mind the conservation of the built heritage, these cellars can only be renovated by the new owner if they are restored to their original state. There are also several private events taking place in the area, thanks to some venues in the cellar village that are suitable for weddings, corporate and family events. Such venues are Kult Pince and Százas Pince, which are no longer wineries but popular event locations, offering local wineries' products for the celebrations. 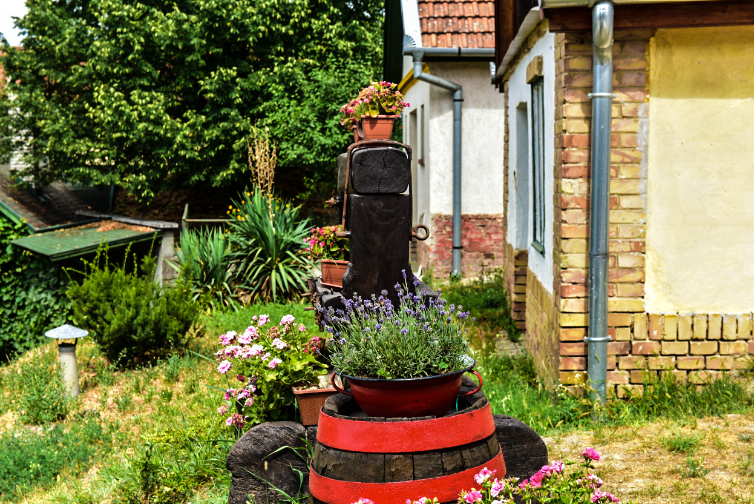 As we walk, we slowly arrive at the first purchased half hectare of land, which Tibor of course cultivates himself, with his own hands. In the small area, newly planted Kékfrankos vines are turning green, enjoying the deeper layers of clay and loess soil mixed with sand. The grapes are clearly thriving here, with almost 100% growing after plantation in the well-kept plot. Given that this is their first own plantation, for the moment all their wines are made from bought-in grapes, nearly 80% of which come from the vicinity, Monor and Monorierdő. In terms of the product range, their wines include Rizlingszilváni (aka Müller-Thurgau), Irsai Olivér, Karat, Olaszrizling, Kékfrankos, Syrah and Zenit, with a total of 5-6000 bottles per year, so these are "micro lots among micro lots", as Tibor puts it. 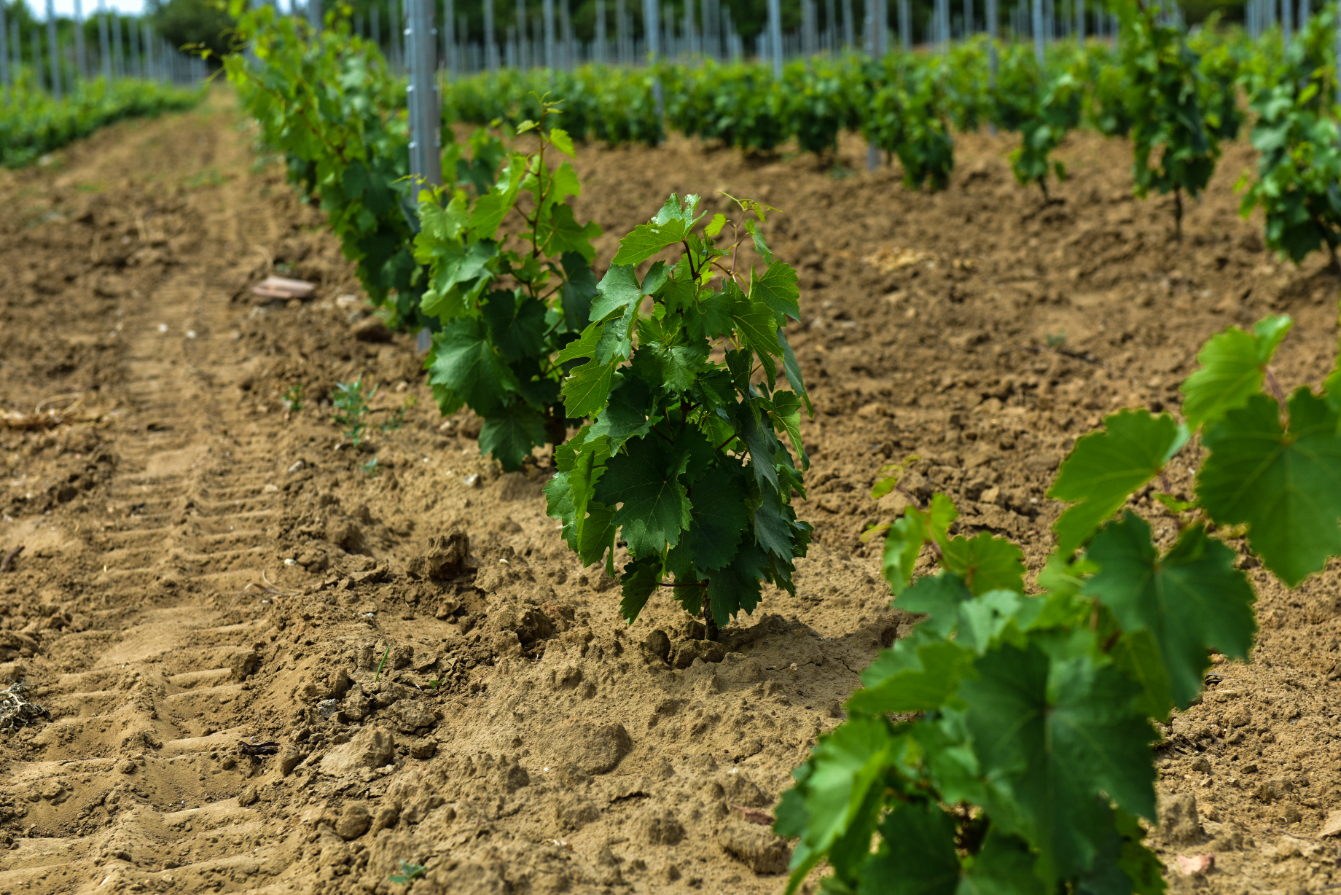 Talking about the wines, the conversation quickly turns to the rare Hungarian variety called Karát:

"I didn't know what to expect when coming here, as, after the Balaton Wine Region, the Danube Wine Region has a completely different character, it had to be discovered and explored. I decided to go for broke when I made a wine from a variety that I knew nothing about. Even in viticultural literature I could only find descriptions about its cultivation from the 1980s, and the climate has changed a lot in 40 years. I am glad I was brave enough to make the first vintage wine in 2017, as in 2018, with a year of experience behind me, I managed to make a reductive Karat that won a gold medal at the Berliner Wein Trophy last year. Such a result encourages the winemaker to dare to use varieties that are less known and less recognised. If you have the right viticultural and technological background and good raw materials, you can create something beautiful." 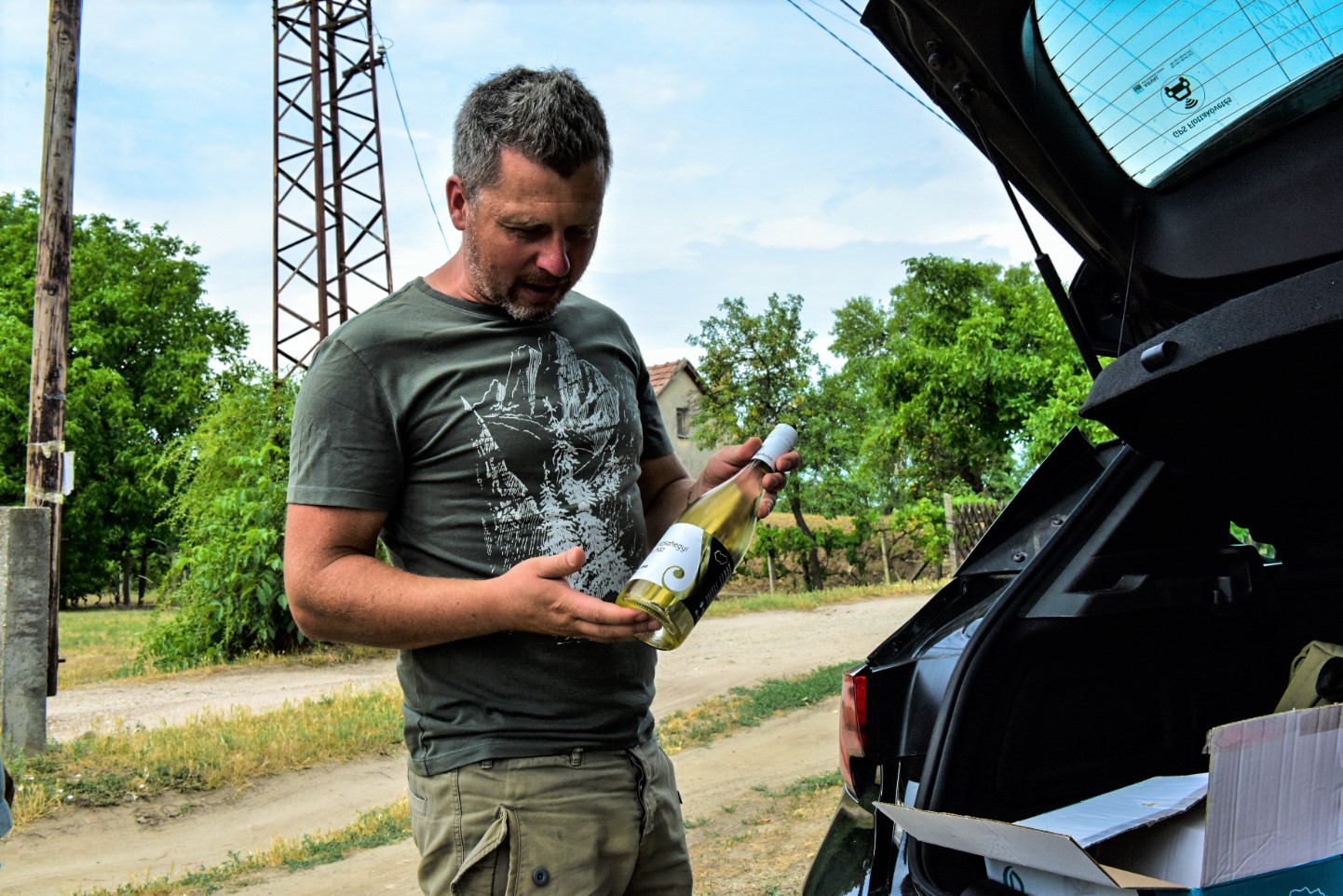 Finally, when we ask Tibor which is his favourite variety, the answer is clear:

"Each wine is made with the utmost dedication, as each is like our own child. Just like with my twins at home, I love them both equally. All our wines represent the same value, we turn with the same expertise and passion towards each one."

Tips for planning your trip 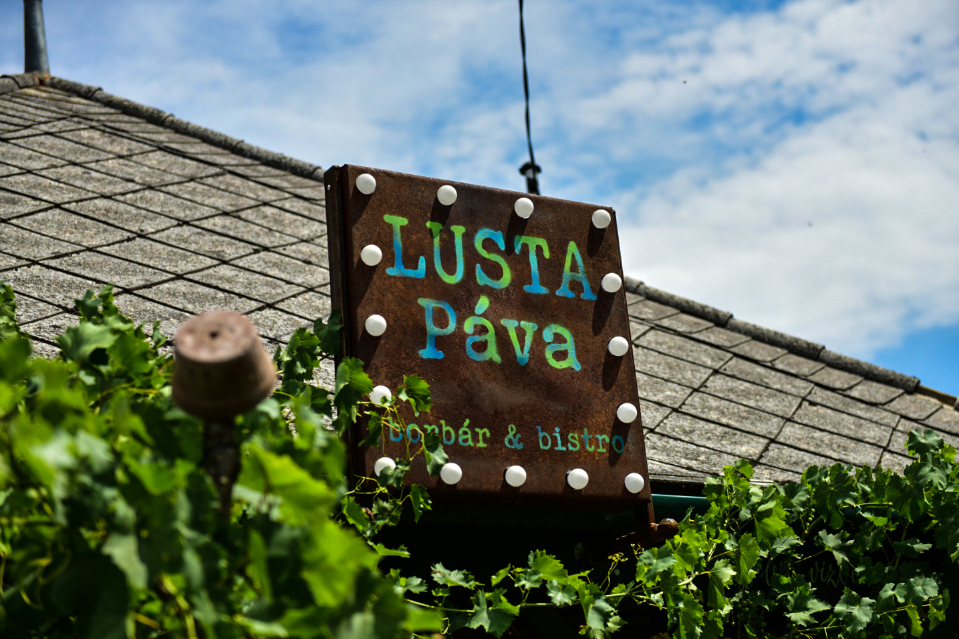 If you're planning a trip to Monor, it's worth exploring the area by following the ‘Thousand Cellars Wine and Vineyard Trail’ (Ezer Pince Szőlészeti és Borászati Tanösvény) leading through the cellar village, and arranging a visit to one of the wineries in advance. For a panoramic view from the aforementioned Strázsahegy lookout, it's worth climbing those few steps, especially if you can cool off with a glass of wine or a fröccs afterwards.
Gastro tip:
For real gourmets, Monor has another surprise in store, only a five-minute drive from the cellar village: the Fürge Páva (Nimble Peacock) is one of the most unique café-confectioneries in Pest County, which will certainly be a special experience with its charming, manicured garden, creative furnishings and, last but not least, its gastronomic offer. In addition, the café will soon have a little brother named Lusta Páva (Lazy Peacock), right in the heart of the cellar village, thanks to the horticulturist owner of the cellar, who transformed it into a café.

The website of the Monor Cellar Village, with more information: https://monoripincefalu.eu/