Harvest is in full swing all over the country, including in the vineyards of the Mátra Wine District. To give an overview of the work in progress, we took a peek behind the curtain - and the harvesting crates - of Nagygombos Winery, with the help of the face of the winery, Anna Barta. With her one-year-old daughter Rózi on her arm, she greeted our little team with a smile on the first day of the harvest, even though this year has been even more challenging than usual...

On this 90-hectare winery, the current division of labour primarily puts Anna in the position of mother, both to Rózi and to her two older children. However, given that her husband and Estate Director, Károly Vicián, likes to leave the majority of decision-making to her when it comes to the wines, it’s safe to say that Anna is still the winemaker of Nagygombos Winery.

We arrived in Hatvan after a rainy period, at the estate founded by Antal Grassalkovich. With the green cover crop between the rows of vines, the signs of drought weren’t immediately striking, and the manual harvest had just begun (the estate has not yet converted to mechanical harvesting). We had the chance to observe and take photos of the hand-picking of Tramini grapes, before Anna began to summarize the year:

“The entire year was quite shocking. It was staggering to see in late July, early August that vegetation first stopped growing, then completely withered. We have newly planted vines on 10 hectares and there was panic all year round that all plants would wither. In the end, the grapevines survived - the crop is another story...”, said Anna, referring to the fact that the drought has resulted in very small berries, even when fully ripe, leading to reduced juice extraction.  “Cabernet Sauvignon has always been known as a variety with limited extraction due to its small-sized berries, but now this is what we expect for virtually all varieties.” 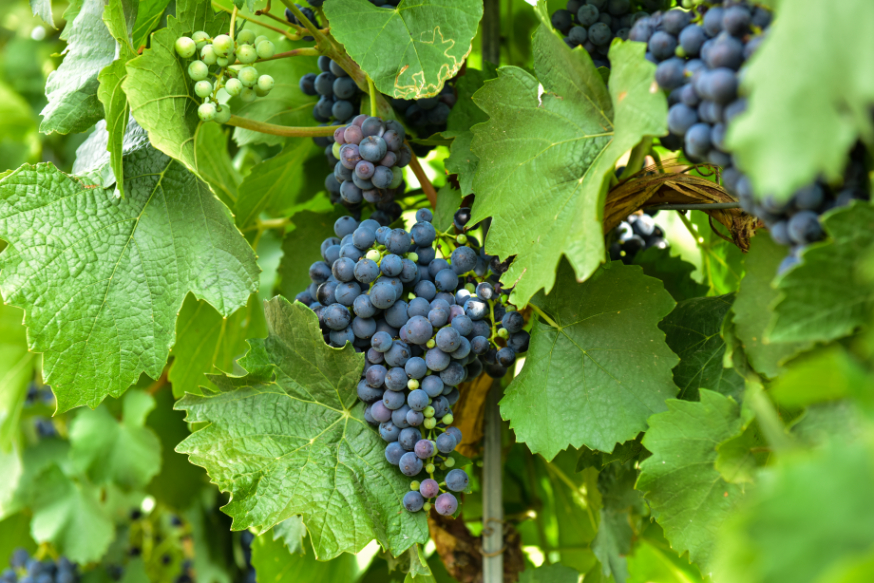 Fortunately, they had no shortage of labour, as evidenced at the time of our visit, when a harvesting team of around 30 people was hard at work in the vineyard. However, the processing plant is short a cellar worker, and they have been trying to find a colleague for months. With a faint smile, Anna added that she’s often wondered if it might not be easier to find a babysitter to look after Rózi, so that she herself could take over duties in the cellar. 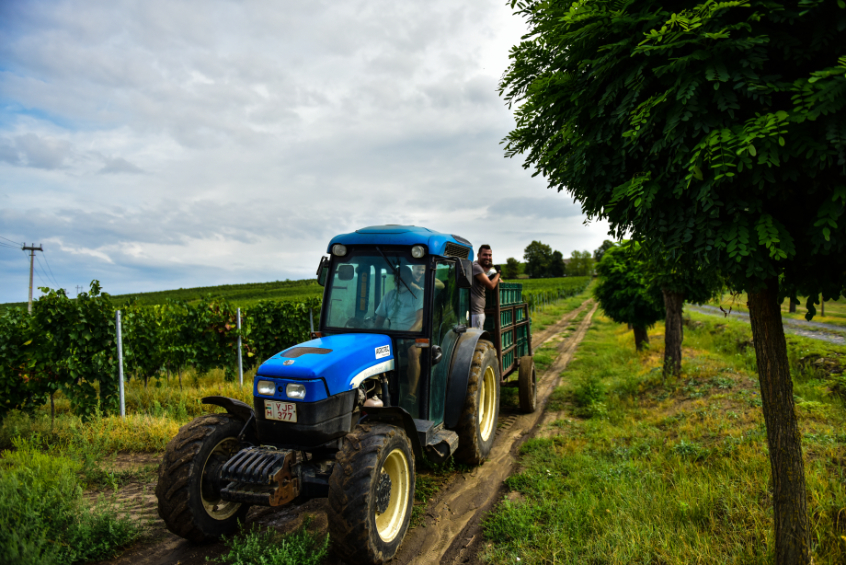 Neither the processing nor the storage capacity is large enough to handle all the raw material coming in from the vast area, so some of the crop is sold as grapes. Talking about the varietal structure, she explains that it has recently been enriched with the plantation of 10 ha of Irsai Olivér (“finally a variety with large bunches that’s good to pick”, she notes), adding to Sauvignon Blanc, Tramini, and Hárslevelű, which together make up the white grape assortment. Red grape varieties include Kékfrankos, Merlot, Cabernet Franc, and Sauvignon, as well as Blauburger, and some Néró, Kadarka, and Gamay on a few hectares. 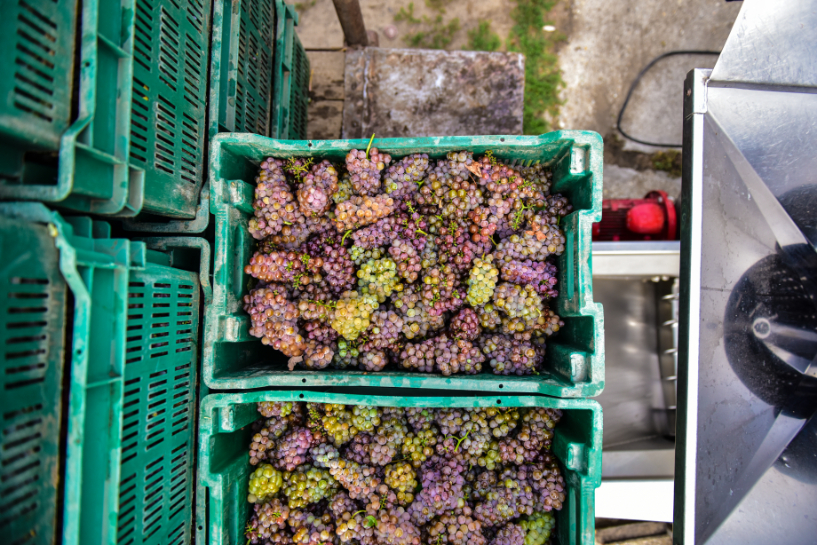 Number-one sellers among their bottled wines are the two types of Nagygombos rosé, a playful number (“játékos” in Hungarian), and a recalcitrant one (“renitens”). The meaning of these adjectives is, of course, best experienced by tasting the wines themselves, when you’ll discover that the names were chosen for good reason. Their aromatic white wine, the barrel-aged rosé, and the red wine made with long skin contact are proof that they wish to meet a wide range of customer needs. 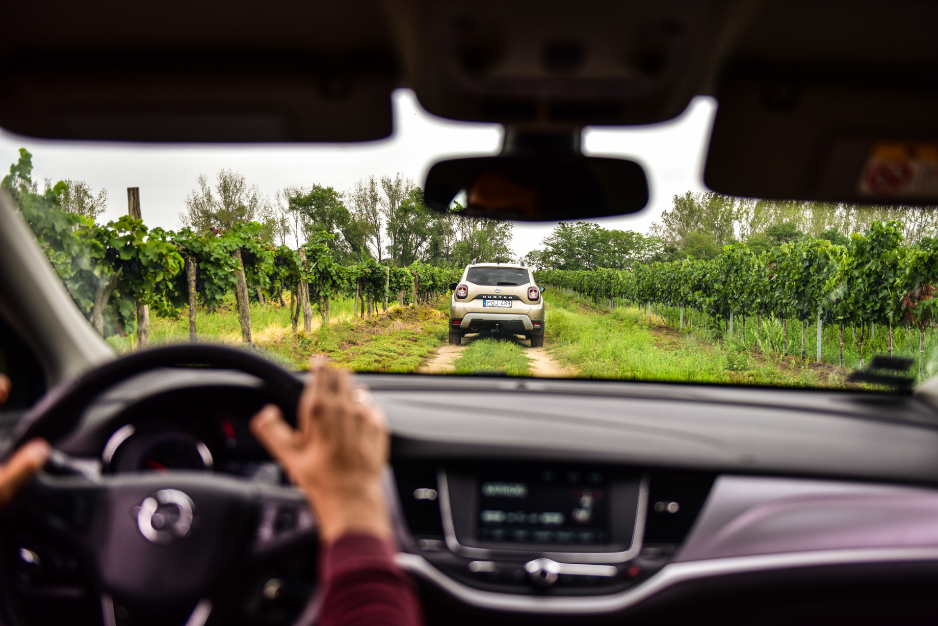 As we arrive at the old, romantic, Baroque-style wine house, built in 1872, Anna tells us that renovation work started two years ago, when tons of slag were removed from the roof and archaeological excavations were completed, but that they were unable to go any further. 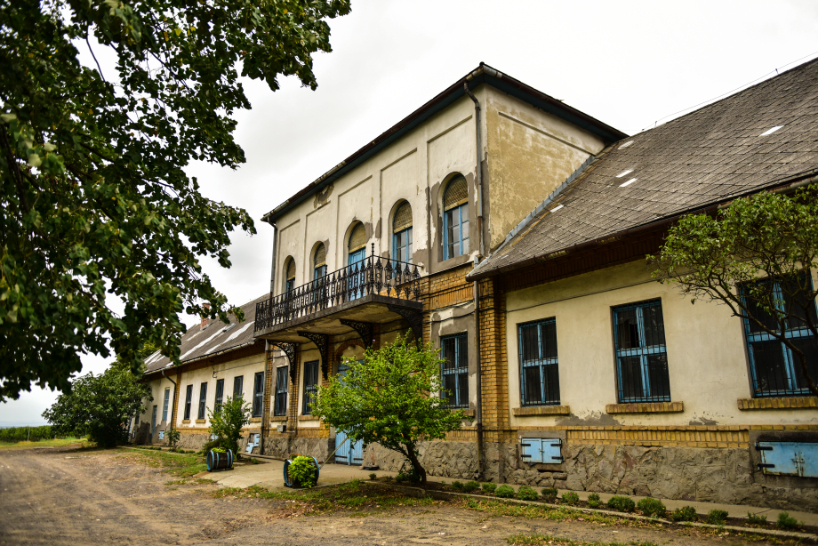 "Finding labour, wood, and building materials is absolutely hopeless. We realized that the construction industry has become so saturated that there is no way forward or back. We were able to completely replace the roof of the small process plant, but work on the wine house lags behind, due to a lack of construction capacity. However, it would be really nice if the wine house could actually function as a wine house.” Currently, the vinifying of the grapes takes place in the processing plant and the adjoining covered area, and only a small amount of wine is fermented and aged in the mansion-like wine house.

Meanwhile, Rózi is happily eating one berry after the other, wading through the vines, pottering among the grapes, feeling right at home in the vineyard. The kids – as you would imagine in a winemaking family – grew up in the vineyards and the cellar. One was just two years old when she showed clear signs of a connection with winemaking by licking the punch-down tool, while the other chose the drip tray to sit in.

Anna’s father (Károly Barta, owner of the Barta Winery in Tokaj) used to give advice regularly to his daughter, who herself began to take on responsibility at an early age, and although he has gradually stepped back from the estate, Anna always welcomes his guidance – especially in difficult times like these, when one challenge follows another. They have also been hit hard by the effects of the pandemic, particularly the recurrent absence of colleagues, but the catering industry shutdown and the resulting drop in turnover have also been huge challenges. And now soaring energy prices will be another burden, with a significant increase in the cost of cooling tanks expected. In addition, the paper shortage is becoming very noticeable, at least on label prices. 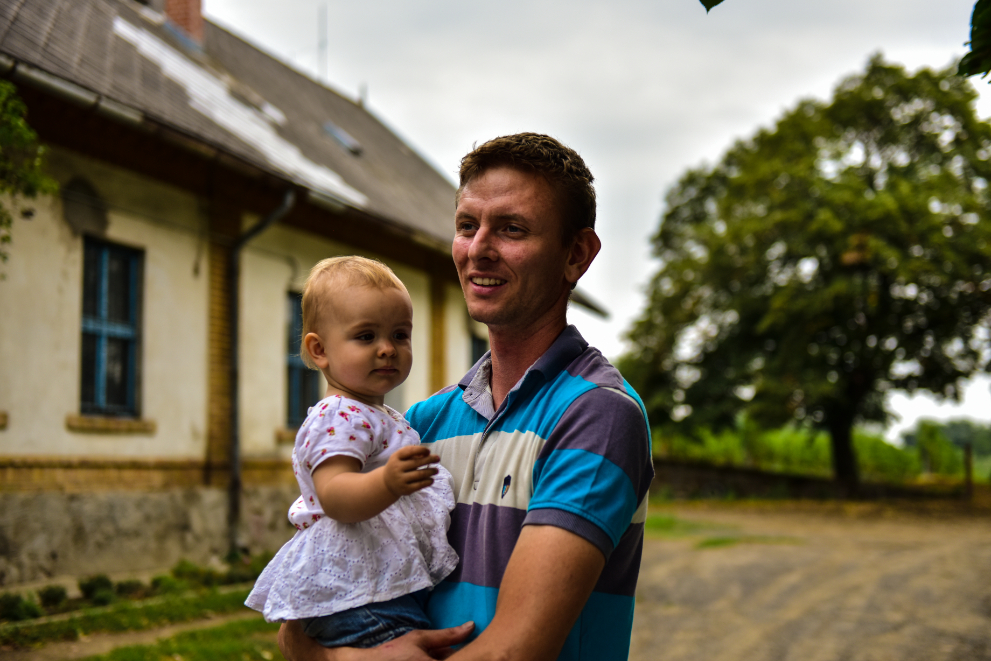 Talking about sales, we learn that the winery does some exporting, with a small proportion of their wines going to England, Canada, and Sweden.

"We don't have too much export at the moment, we still need to work on that. Nagygombos, by the way, is not an ideal export name, so for a while, we sold our Gamay rosés by the name Grassalkovich. However, this name had to be changed as foreigners could not understand why a German-sounding name would be applied to a Hungarian wine. For a while, we explained that Nagygombos was part of the Grassalkovich estate, but eventually, we realized that we could not keep that name. We have read statistics that customers do not like difficult-to-pronounce, complicated names, and this might lead to a kind of distrust of the wine. That is why today our more sophisticated wines are marketed under the name Barta Anna." 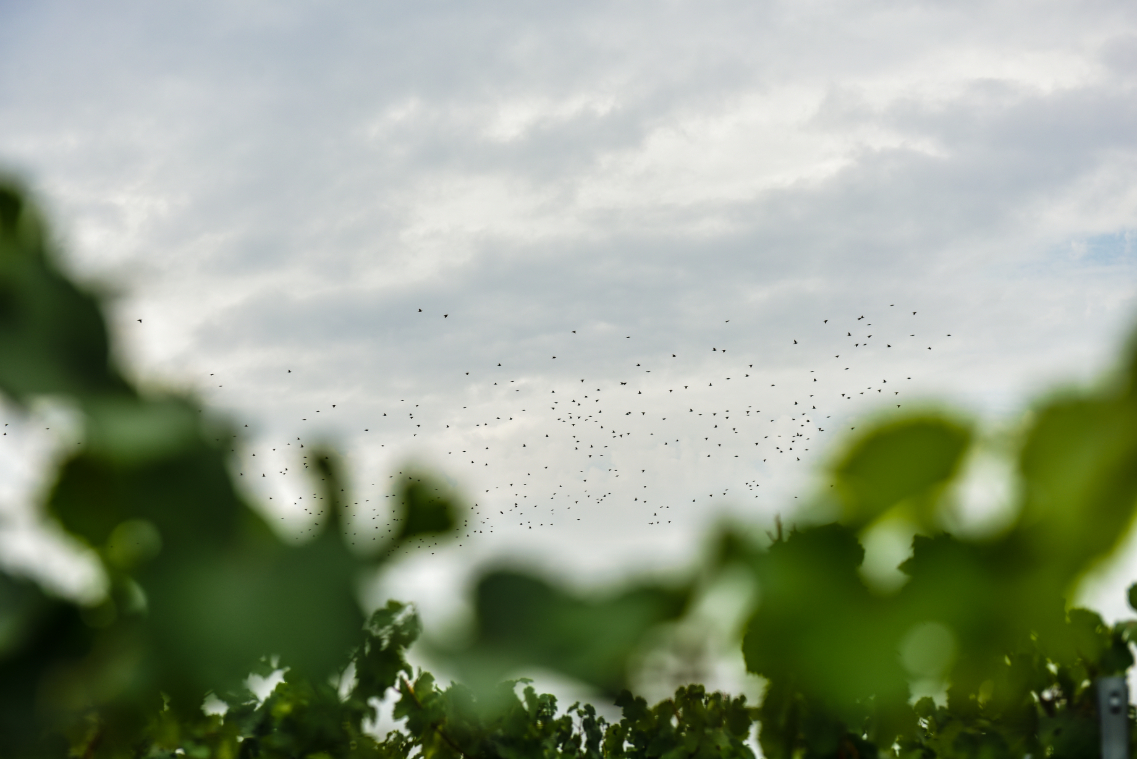 Finally, we arrive at the rustic building of the wine house with its large cellar below. It needs major external and internal renovation and is currently not suitable for events, and that’s why tables are placed under the linden trees when groups arrive, so that the imposing building can at least serve as an authentic, romantic backdrop for tastings. There have been weddings, photo shoots, and even a running race held her, and the winery is happy to be part of and to host such projects. 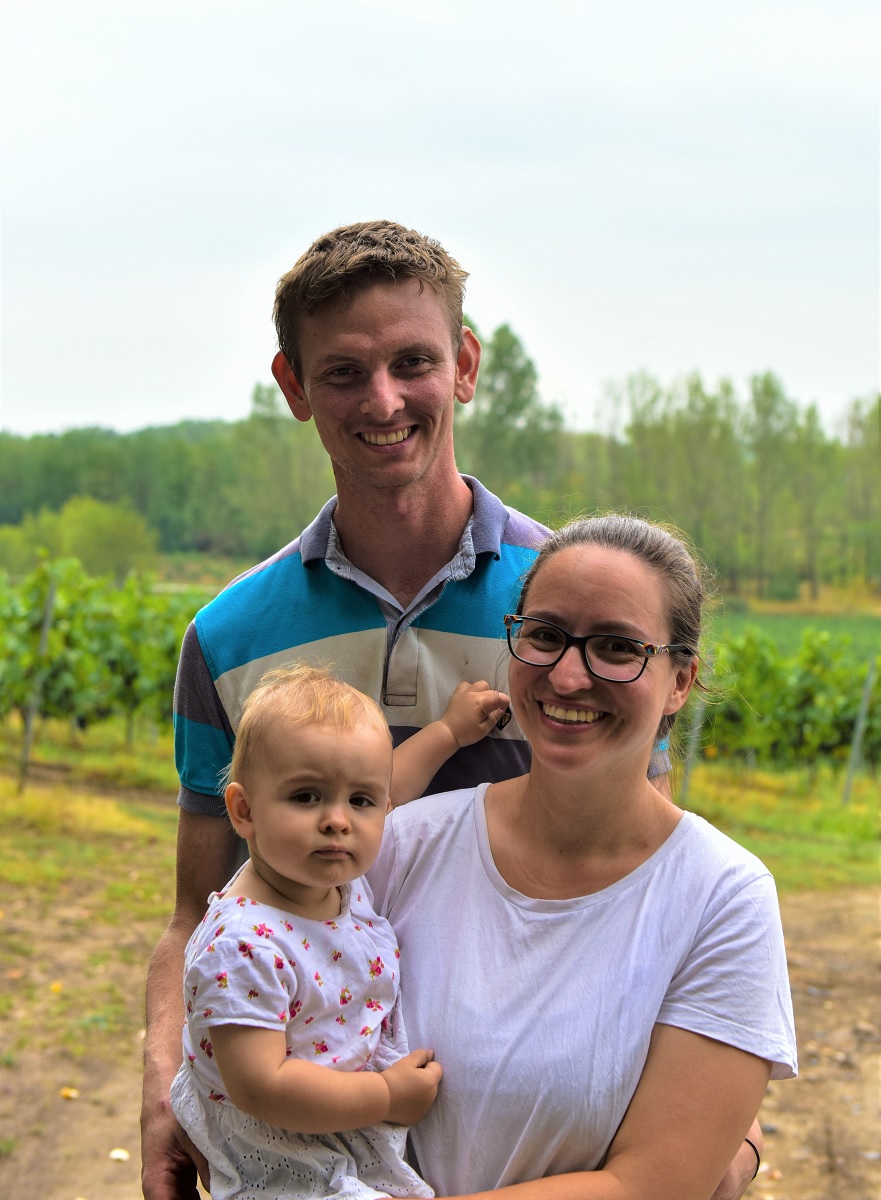 So, there's plenty of work to do at the moment, with the large quantities of grapes and the production of 20,000 bottles of wine keeping them busy, and all of this with constant challenges requiring adaptation. However, this was not for a minute reflected in Anna's mood and attitude; her wines, as we had the opportunity to experience, are as balanced as the winemaker who produces them.