Hungary is a treasure trove of treats for wine lovers to discover. With its centuries of winemaking traditions, unique varieties, stunning landscapes, unusual built heritage, wine specialities and welcoming winemakers, there’s certainly plenty to explore. And as you will be so spoiled for choice, we’ve put together a list of 10 places that wine lovers visiting Hungary really should not miss.

No wine lover can come to Hungary and not visit the Tokaj Wine Region and its ancient cellars. Not only is the wine region a UNESCO world heritage site, but it also boasts one of the world’s most sublime noble sweet wines, Tokaji Aszú. Shrivelled, botrytised grapes are carefully soaked in new wine or fermenting must and gradually turned into the lusciously sweet nectar Aszú, which rightfully deserves its name of wine of kings and king of wines. This precious liquid is first stored in barrels in kilometres-long, cellar networks, where the walls and ceilings are covered with black cellar mould. And you can visit it them down there as the wine rests and matures. A stunning sight – rows of wooden barrels, against black mould-covered walls, sometimes interspersed by glowing amber bottles. 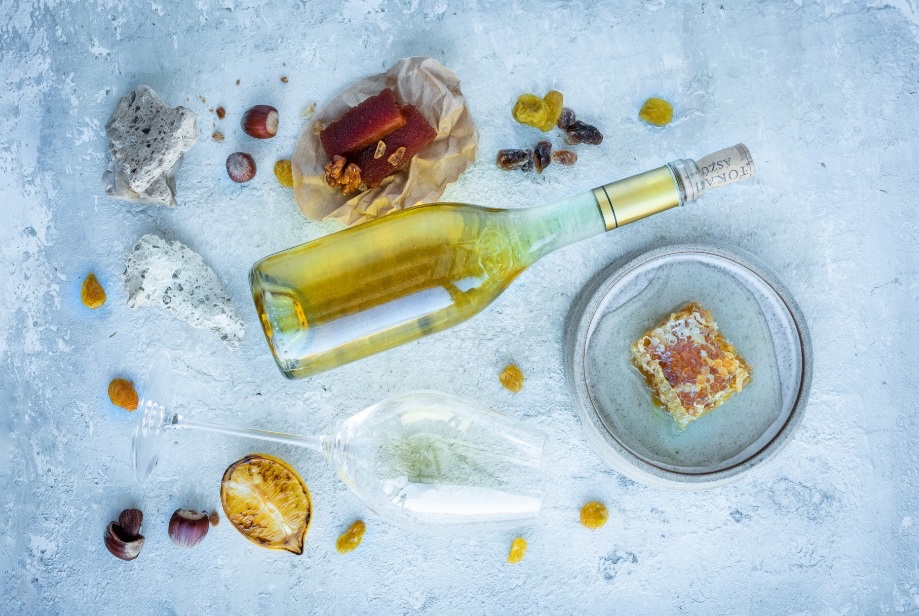 2. The surreal volcanic landscape of the Balaton Highlands

One of the most spectacular natural sights in Hungary is that of the volcanic landscape along the north-western shore of lake Balaton, comprising the Badacsony Wine District and the Balaton Highlands Wine District, with the lonely hill of Somló some distance away. A collection of strangely shaped volcanic cones and hills, known as witness mountains in Hungarian, comes into sight as you travel along the southern shore of the Balaton and gaze across the lake. These are the remains of a series of underwater volcanoes from the time when the area was covered by the Pannonian Sea – the Balaton is what remains of this today. The best view of them is from the southern shore, but if you want to sample some Badacsonyi Kéknyelű or Szürkebarát at one of the wineries there, you can also take a ferry across. 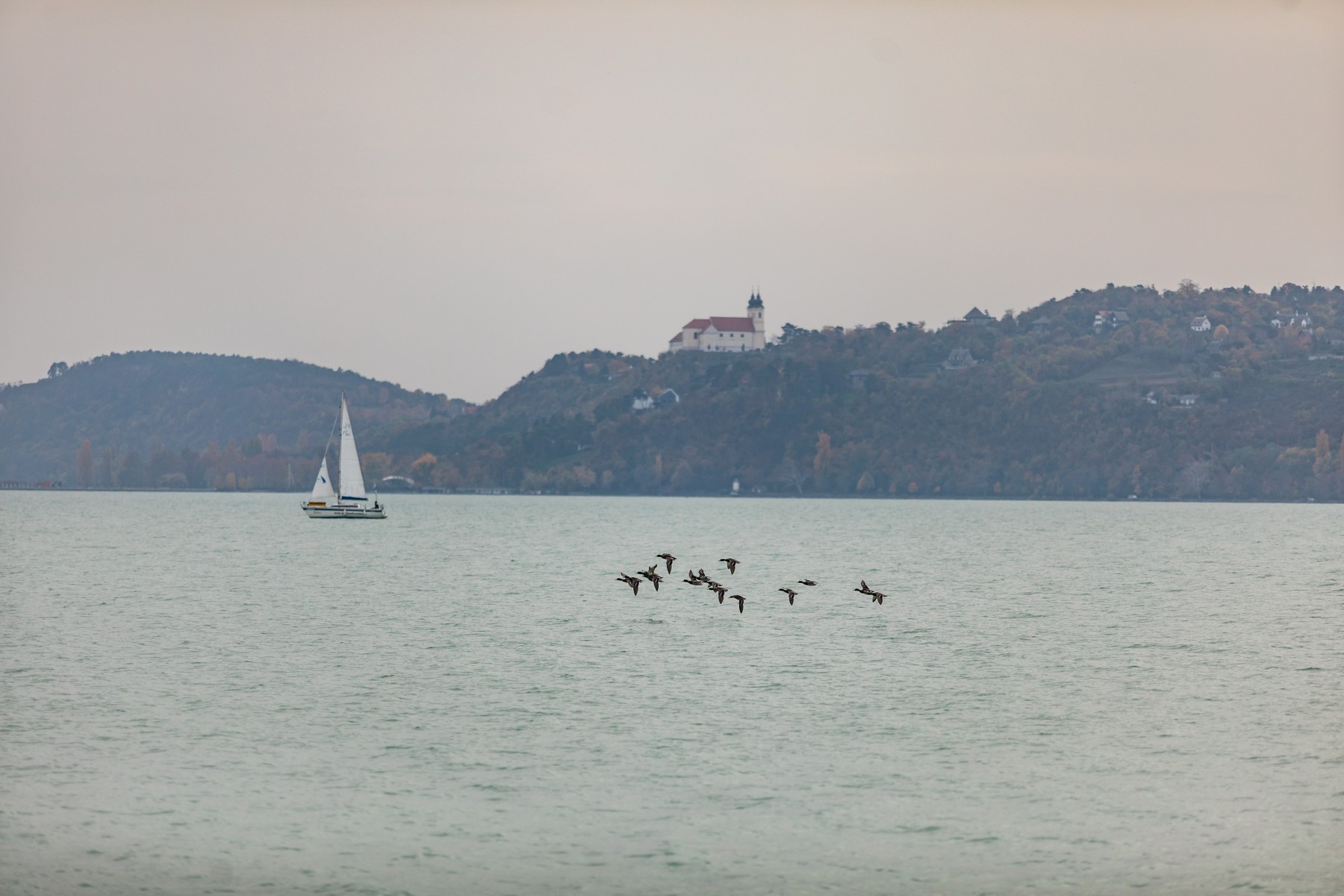 Hungary also boasts some atmospheric cellar villages, which are peaceful places to stroll around and admire the beautifully restored press houses and sample some of their wares. These are known as pincefalu in Hungarian, and there used to be many more of these small ‘villages’, often at the edge of a larger town. The Monor Cellar Village is only about 30 kilometres from Budapest and boasts nearly 1,000 wine cellars, while the Hajós Cellar Village in the Hajós-Baja Wine District is the largest in Europe with an amazing 1,300 wine cellars. The cellar villages come alive for their annual harvest festivals and other festivities, while Hajós throws open its cellar doors on Cellar Saturday, the second Saturday of each month. 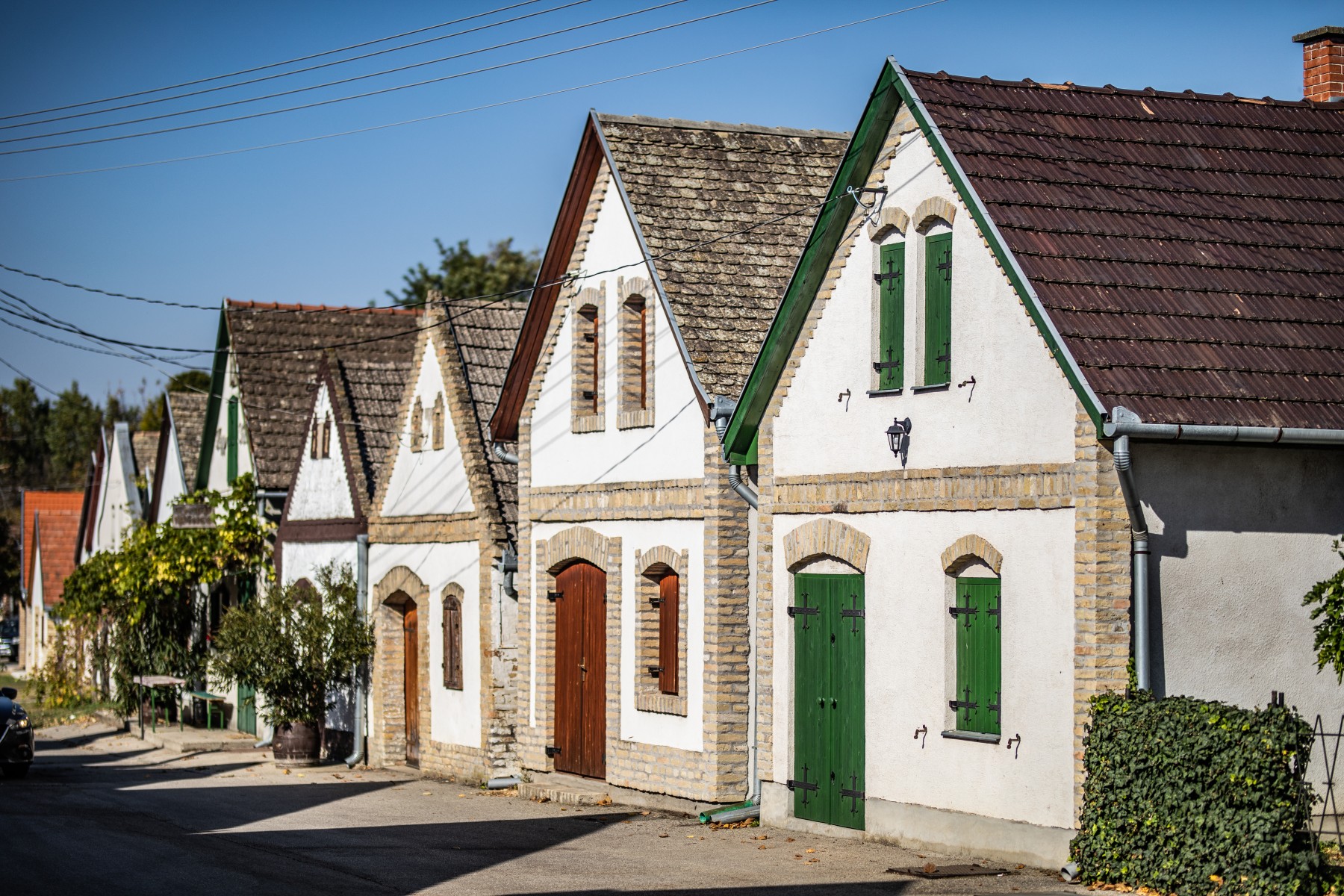 Red wine lovers should make a pilgrimage to Eger, less than 2 hours from Budapest by train, and explore the beautifully restored Eger city centre, home of the legendary Egri Bikavér, with its castle ruins perched above it. You can take a dip in the 17th century Turkish bath, view the city from above from the oldest camera obscura in the world in the Lyceum’s Magic Tower, admire the only minaret in the world topped with a cross and take a tour of the vast cellar system under the Archbishop’s Palace, the ‘City under the City’. By then, you will deserve a glass of Egri Bikavér or Egri Csillag in Tibor Gál’s Fuzio bistro in the city centre or a wine tasting at the Bolyki Winery in an old stone quarry, or you could while just away the evening at one of the wine cellars in the Szépasszony-völgy. 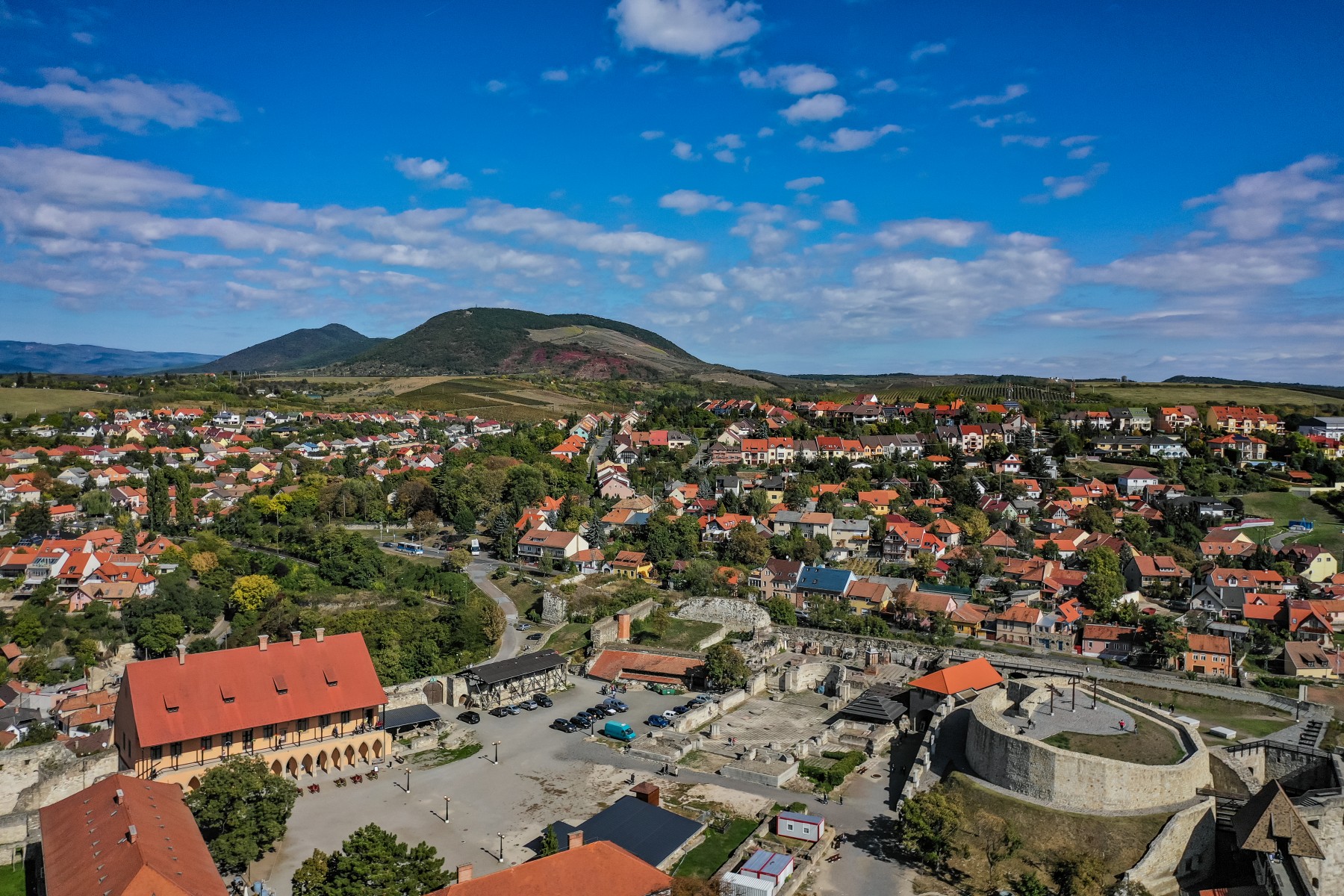 5. The rolling hills and loess gullies of Szekszárd

Explore the beautiful, tranquil landscape of the Szekszárd Wine District, with its gently rolling hills and valleys crisscrossed with gullies cut deep into the loess by water erosion over the centuries. These now function as roads, and you really have to hope nobody is coming in the other direction as you drive up and down them, as they are so narrow. Enjoy a glass of Kadarka, Kékfrankos or Szekszárdi Bikavér on the terrace of one of the many small wineries nestled among the vines. Enjoy the view at the Heimann Family Winery, or stay the night at the Takler Wine Estate or the Bodri Winery and experience some hearty Swabian hospitality and food. 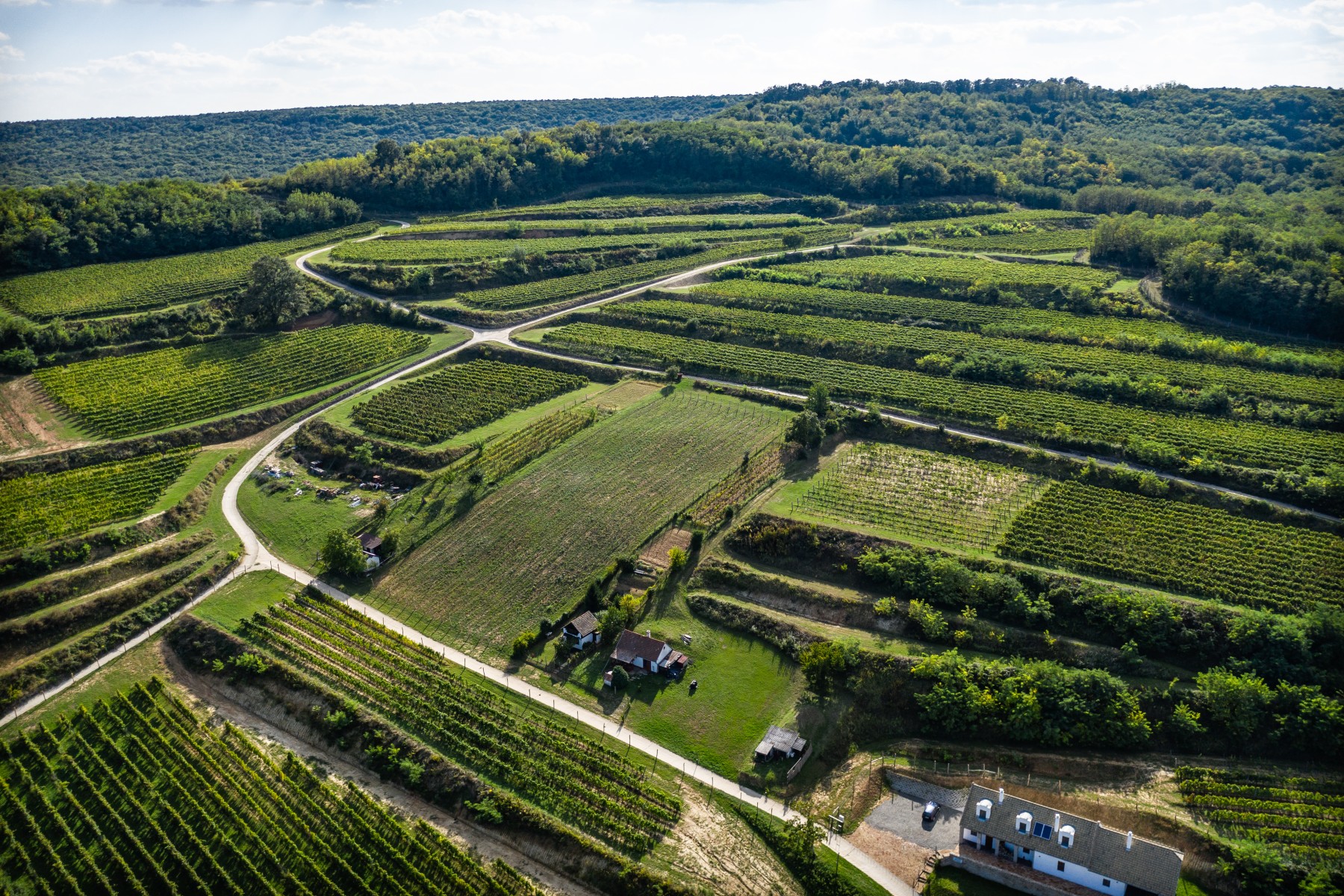 Head to the region’s most southerly wine district – Villány – to partake of some full-bodied reds, especially its flagship wine Villányi Franc, its take on Cabernet Franc. Explore the Swabian cellar rows lining the streets in Villány, Villánykövesd and Palkonya. Villány is also a good place to pamper yourself, as two of the wineries boast four-star hotels with spas. So, lay your head at either the Bock Hotel Ermitage or the Gere Crocus Resort & Wine Spa, where you can also indulge in some grape and wine-based vinotherapy. But also make sure you try some wine in one of the cellars along the main road, such as the Lelovits Tamás Winery or Szende Winery. 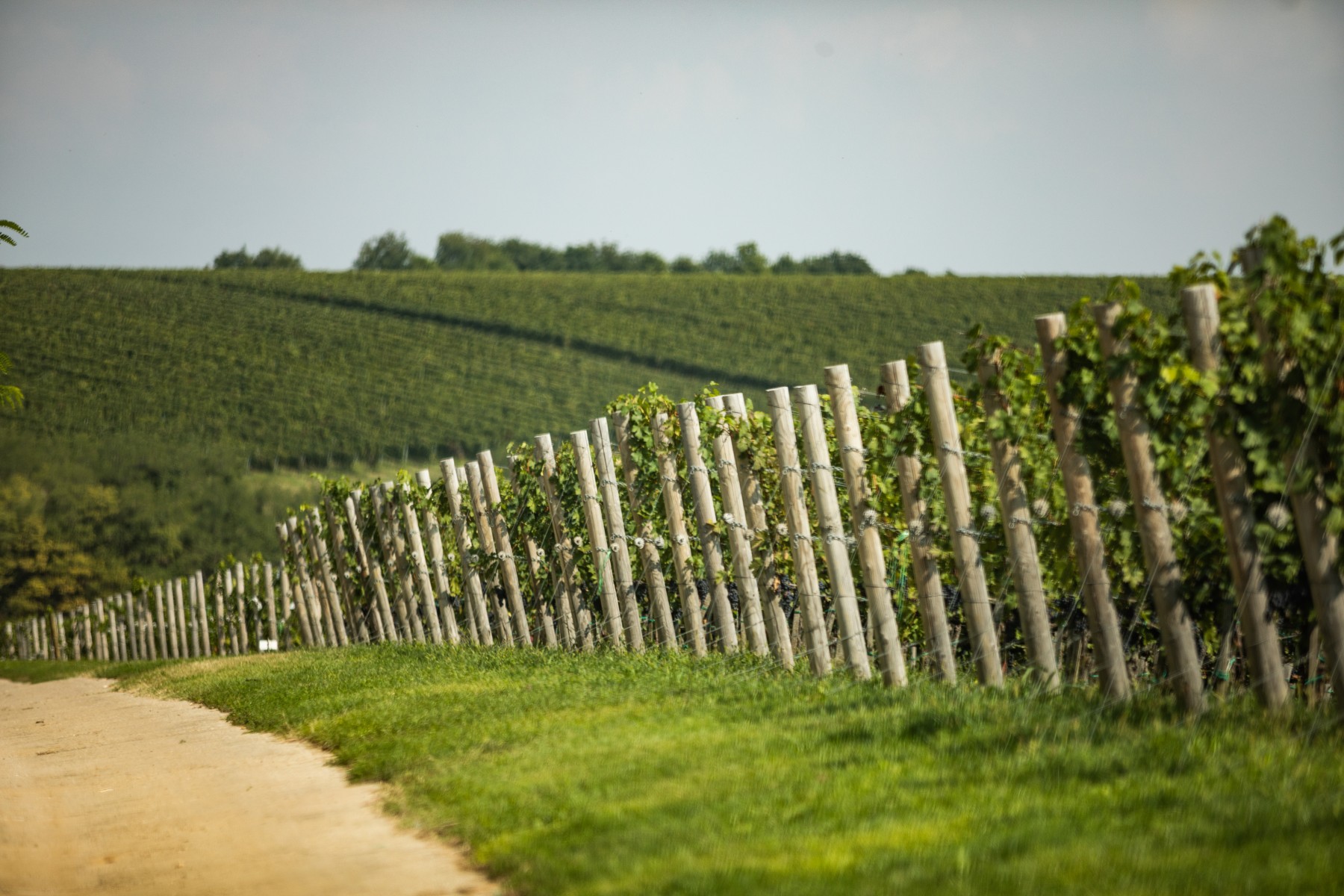 No wine trip is ever complete without spending some time among the vines. Of course, it’s exciting to go on a vineyard tour organised by a winery, but it’s also wonderful to wake up, look out of the window and see that you are surrounded by vines. It could be a fancy place with fine dining or a spa, or more rustic surroundings, simply a guest house set among the vineyards. Stay on Szent György Hill in one of the traditional guest houses at the Szászi Vineyard, in the contemporary rooms at the Kristinus Estate in Kéthely on the southern shore of the Balaton, with a panoramic view over the Danube at the Hilltop Neszmély Winery, or at the ultra-modern Lajvér Winery set into the side of a Szekszárd hillside. The choice is yours. 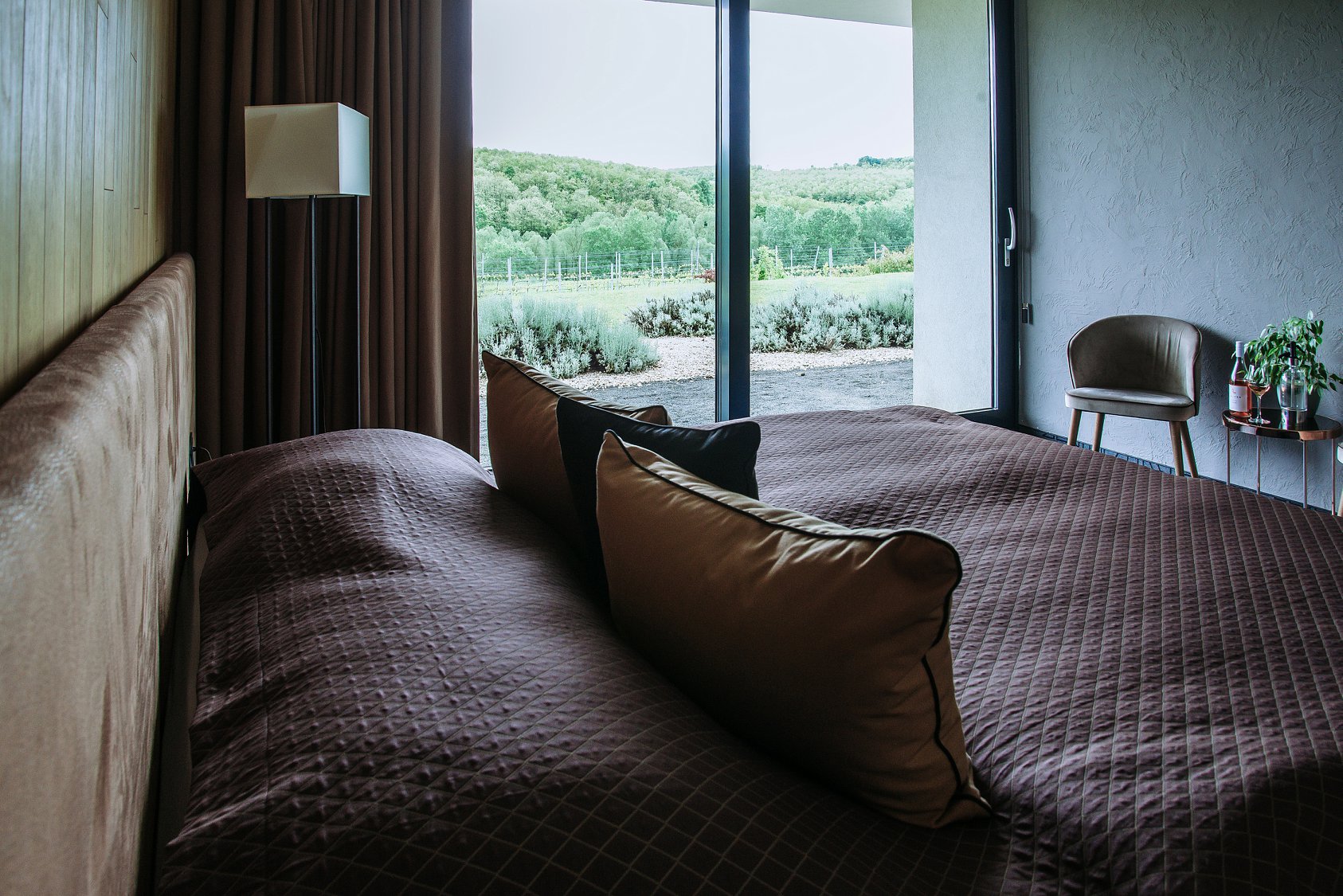 In the early 20th century, Hungary was a major producer of traditional method sparkling wine, second only to France, and Champagne. Although this is no longer quite the case, sparkling wine is experiencing a renaissance in the country, with many producers making sparkling wine, whether it be traditional method, pét-nat or frizzante. So you should dip your toes into this world. You could head to Budafok and visit the traditional cellars of the country’s largest and one of its oldest producers, Törley Sparkling Wine Manufactory, visit the museum and taste their large range of wines. Alternatively, travel to the Nagy-Somló Wine District and experience the modern winery, hotel and restaurant of the Kreinbacher Estate or to the Balatonboglár Wine District and the Garamvári Estate, which has over 100 years of making fizz in its cellars carved into the limestone. 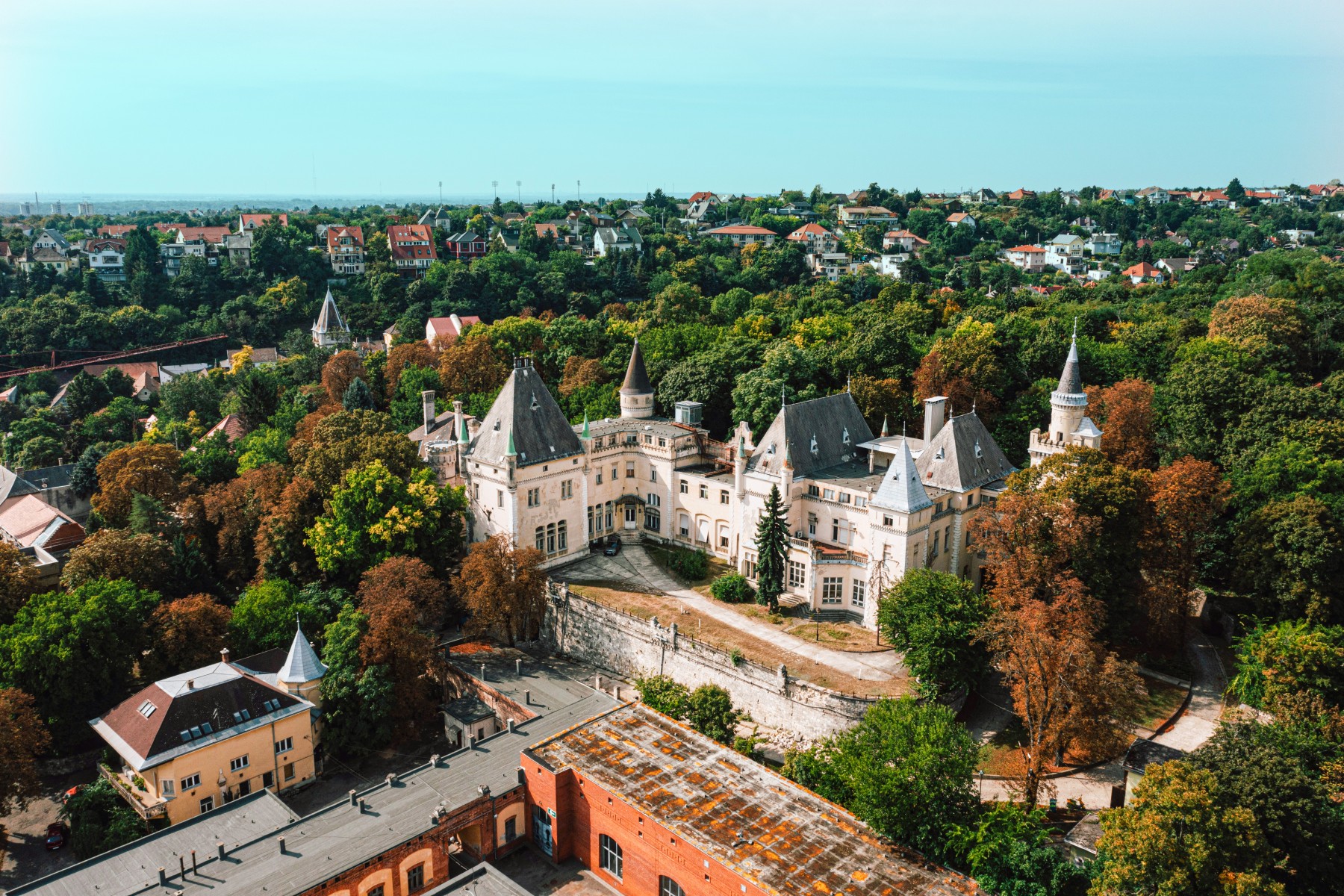 Wine lovers needn’t even leave Budapest to explore the best of Hungarian wine, as the capital boasts a wide range of diverse wine bars. In the city centre, at least, it feels as if there is one on every corner. In fact, you can taste your way through Hungary without even leaving the comfort of your chair. There’s plenty of places in the ‘party district’, in the more tranquil 5th district and further out in more residential areas. Natural wine fans can also find the right tipple for them in several natural wine bars. Find out more about Budapest’s wine bars in the Wine Bar Guide.

Hungary is sometimes called a country of festivals, and this is no different when it comes to wine. Hardly a month goes by without some kind of wine or food festival in the capital, smaller cities or the wine districts themselves. This is a great chance to soak up the local atmosphere and chat to winemakers and other wine lovers. Nearly every wine district has at least one festival during the year, at harvest time, and most likely several more too! Enjoy Tokaj Wine Days in June, rosé at Rosalia in the City Park in June, the Szeged Wine Festival in September and the Budapest Wine Festival in September… But, be warned, the list is endless! 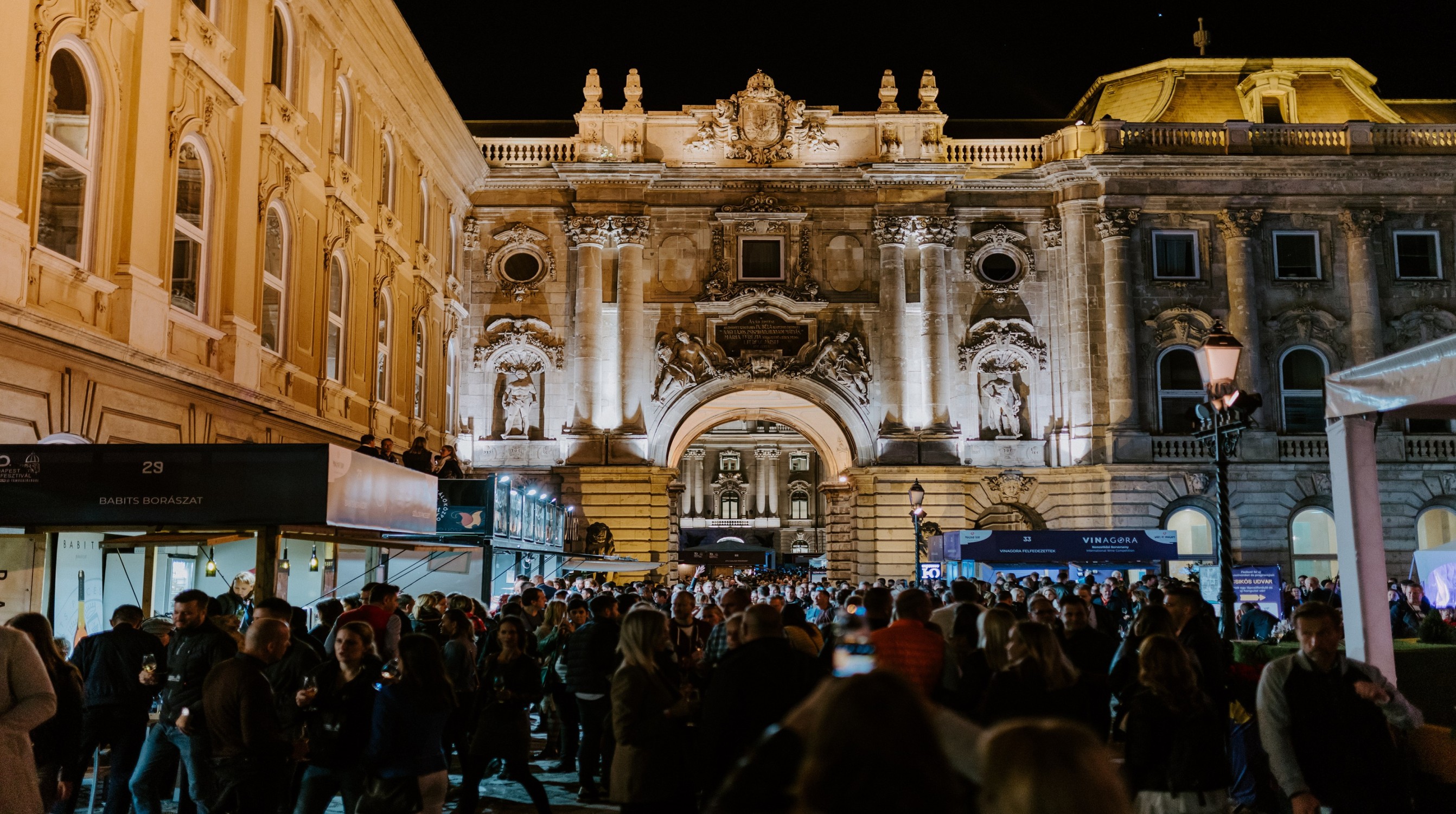 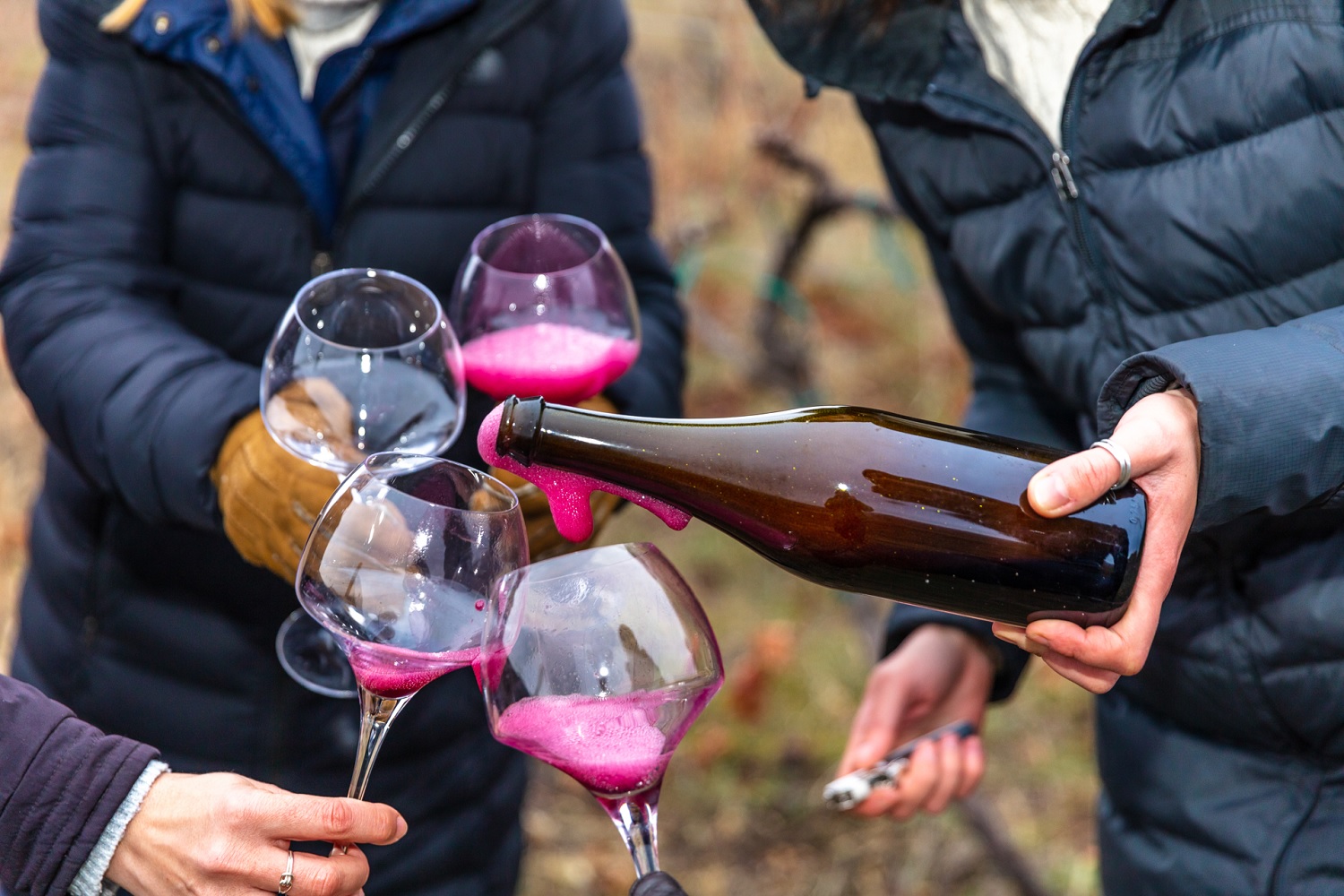